'A sense of belonging': Corporate choir sings out for mental health 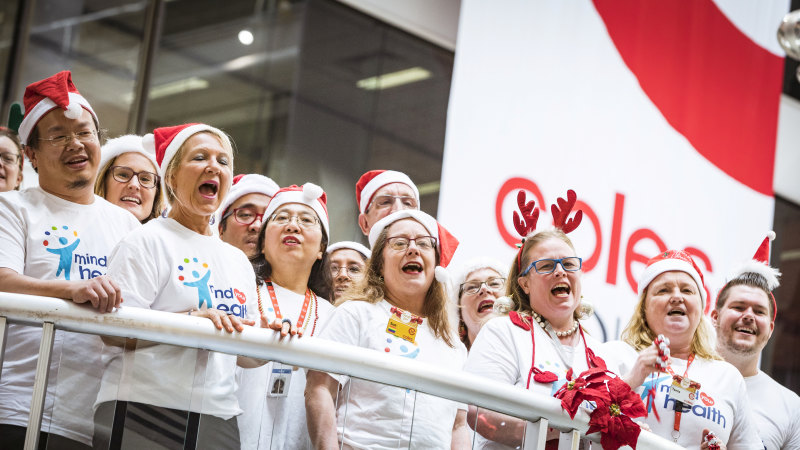 Conversations fade away, phone cameras come out, and small groups of busy employees surround the levels of the cavernous foyer to snatch a few minutes of Christmas cheer. 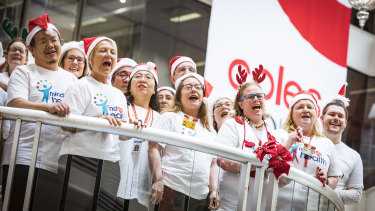 From an outsiders perspective, a group of antlered employees belting out a Spanish carol at the centre of Australia's second-biggest supermarket is moderately bizarre. But for the company, it's just another Wednesday.

Coles' choir, officially known as the Coles Community Singers, has been running for nearly five years, beginning as a three-month trial and growing into a mainstay of company festivities.

The supermarket isn't the only major corporate to dabble in singing clubs. Both official and unofficial choirs exist at Telstra, Macquarie, National Australia Bank, Coca Cola and Westpac, the latter of which includes flute and piano accompaniment. 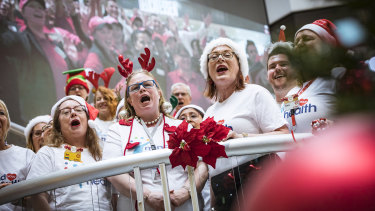 Andrea Currie (right) sings with the Coles Community Singers. “I always leave with that sense of satisfaction.”Credit:Chris Hopkins

"We get people who've never sung before saying 'I can't believe how good I feel, what's the secret?' We don't know, it just happens."

Islip has run choirs for many members of corporate Australia, including ANZ Bank and international law firm Herbert Smith Freehills, though he wouldn't comment on their singing prowess.

According to Deborah Yates, managing partner for people, performance and culture at KPMG, the number of choirs and similar mental health initiatives across corporate Australia is on the up, as businesses tune in to their clear benefits for employee wellbeing.

"Mental health is a staggering challenge for Australians, with 20 per cent of us between the age of 16 and 85 experiencing a mental illness each year," she says.

"So while you could jokingly look at a choir, it makes a fundamental difference to mental wellbeing at work. It's a natural way to create a sense of belonging for workers."

KMPG's own initiatives include a chess club and a running club, along with a choir group ran by the Barangaroo Precinct. It's these sort of offerings that help draw top employees to workplaces, Yates says.

"Employees are really looking for somewhere where they can find a sense of belonging, and these initiatives are an important part of that."

A choir for all

Following their foyer performance, the Community Singers will set off on an hour-long carolling tour throughout the office, which is surprisingly well-received by employees, Currie says.

"People sometimes feel like they need permission to listen or join in, but we find once we get started people quickly gravitate towards us," she says.

With just over a week to go until Christmas, carols are the main focus for Currie and her crew, though at other times of the year any song is fair game.

"We've got dozens and dozens in the repertoire now, but my personal favourite is Viva la Vida, by Coldplay because its such a challenging song but it sounds amazing and it just draws people in to listen," she says.

But, over a five-year tenure and numerous performances, has the choir ever performed the company's iconic rendition of Status Quo's Down Down?

Email ThisBlogThis!Share to TwitterShare to FacebookShare to Pinterest
Labels: &#039;A, belonging&#03, of, sense