The Tax Break for Children, Except the Ones Who Need It Most 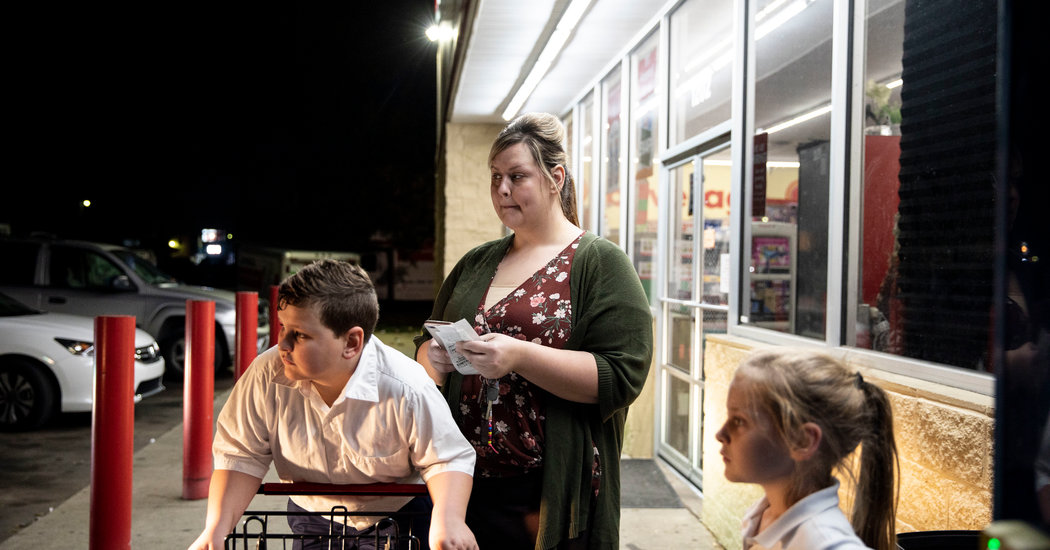 MONROE, La. — With two children and a third on the way, Ciera Dismuke worked five jobs last year while earning just under $15,000. Although the Trump administration often boasts that it doubled the federal child tax credit to $2,000 per child, Ms. Dismuke, like millions of Americans, earned too little to fully qualify. Instead, she got $934 a child, an increase of just $75.

Letha Bradford, a teacher’s aide, qualified for an equally small increase, despite a household budget so tight that she listens to her son’s high school football games outside the stadium to save the admissions fee. Michael Spielberg, a Sam’s Club attendant, also received only a partial credit, while his son, Josh, who has Asperger’s syndrome, doubled up on classes, hoping to graduate early and turn his job bagging groceries into full-time work.

The 2017 tax bill, President Trump’s main domestic achievement, doubled the maximum credit in the two-decade-old program and extended it to families earning as much as $400,000 a year (up from $110,000). The credit now costs the federal government $127 billion a year — far more than better-known programs like the earned-income tax credit ($65 billion) and food stamps ($60 billion).

But children with the greatest economic needs are least likely to benefit.

While Republicans say the increase shows concern for ordinary families, 35 percent of children fail to receive the full $2,000 because their parents earn too little, researchers at Columbia University found. A quarter get a partial sum and 10 percent get nothing. Among those excluded from the full credit are half of Latinos, 53 percent of blacks and 70 percent of children with single mothers.

“The child tax credit is the largest federal expenditure for children, but it excludes from the full benefit the kids who need it the most,” said Sophie Collyer, a member of the research team at Columbia, who analyzed the program with her colleagues Christopher Wimer and David Harris. “This is a significant flaw in its design that’s at odds with the administration’s claims about the achievements of the tax bill.”

Because the credit rises with earnings, a single parent with two children has to earn more than $30,000 a year to collect the full amount.

Republicans say that the credit is mostly a tax cut, not an anti-poverty program — so rightly favors taxpayers — and that the needy have other sources of aid. But a majority of congressional Democrats have backed a bill to increase the credit and include both the working and nonworking poor, essentially creating a guaranteed income for families with children.

Many rich countries have similar child allowances and less child poverty. But opponents call the idea welfare and warn it will discourage work and responsibility.

Rarely has a program grown so rapidly with such little public notice. While it began in 1997 almost entirely as a tax cut, it is already an anti-poverty program: About 30 percent of its value now goes to “refundable” credits — partial cash awards — for families with no income-tax liability.

Championed by Newt Gingrich and expanded by Barack Obama, the credit has a history of bipartisan support. But the attempt by Democrats to remove the earnings test is a shift for a party that since the Clinton administration has been wary of the welfare label and reflects concerns over stagnant wages, as well as new research showing that even modest amounts of extra cash can have lifelong benefits for children.

By enriching the credit and including the affluent, the Trump expansion itself has brought attention to the poor children it excludes. While the 2017 law made millions of upper-income families eligible for the $2,000 credit (in part to offset the loss of other tax benefits), it gave a boost of just $75 to most full-time workers at the minimum wage.

“It left out 26 million kids” from the full sum, said Senator Michael Bennet, a Colorado Democrat who has helped write a bill to raise the credit to $3,000 per child ($3,600 for those under 6) and pay a portion monthly. “It’s critical that we don’t leave it as a half measure. Our entire conception of ourselves as a land of opportunity is diminished by the fact that our child poverty rates are as high as they are.”

The limits of the credit’s reach can be seen in Monroe, a sleepy commercial crossroads 100 miles or more from surrounding cities, where pay is low and workers looking to advance often travel for oil-field jobs or check the want ads in Texas.

Monroe is in Louisiana’s Fifth Congressional District, one of 37 districts in 22 states where half the children or more have parents too poor to get the full credit, according to Ms. Collyer of Columbia. In the New York 15th (the Bronx), the share is 68 percent. In the Texas 34th (Brownsville to the outskirts of San Antonio), it is 61 percent.

In the Louisiana Fifth, 54 percent of children are too poor to receive the full $2,000. Among those with a partial benefit, the average is $1,008.

Many low-income families do not realize they receive the complicated benefit, which is often confused with the earned-income tax credit. Until she showed a reporter her tax return, Ms. Dismuke did not know she had gotten $934 per child. Told that affluent families get much more, she said, “That is not right — I’m quite sure they don’t need it.”

But Christina McKeigan, a divorced mother of three eligible for about half the maximum credit, said it made sense for richer families to get more. “They probably pay more in taxes,” she said. She earned $23,000 last year and stretched her budget with apps for discount grocery stores and recipes for cheesy chicken spaghetti. “I can do a lot with the amount I get.”

Scholars have long debated whether giving needy families cash raises their children’s prospects, especially if there are other problems like depression or domestic violence. But many cite growing evidence that money alone does in fact help.

The National Academy of Sciences, a group created to convey the scholarly consensus, recently concluded that raising incomes of poor families has “been shown to improve child well-being.” Reviewing dozens of studies, it found child benefits as varied as better test scores and graduation rates, less drug use, and higher earnings and employment as adults.

While findings vary, “the weight of the evidence shows additional resources help the kids,” said Greg Duncan, an economist at the University of California-Irvine who led the study.

At least 17 wealthy countries provide a child allowance, including Australia, Ireland and Britain. After a 2016 Canadian expansion offered up to $6,400 per child, the country’s child poverty rate fell by a third.

Money helps children in part because of what it can buy — more goods (cheesy chicken spaghetti) and services (gymnastics classes or tutors). Ms. Bradford, the teacher’s aide, is so eager to invest in her sons that she has used tax refunds to send them on Boy Scout trips to 42 states — even when a flood left them living in her car. “I’m trying to instill in them that it’s education that gives you knowledge and power, not cars or clothes,” she said.

Before traveling to Washington and visiting the Vietnam Memorial, the boys — Tony, 17, and Micah, 13 — wrote a report on a Monroe man killed in the war, which the public library added to its collection. Finding the soldier’s name on the wall, Micah said, “felt like touching history.”

Money also helps children by relieving stress, which can reach toxic levels in poor families. Earning just $16,000 despite 15 years in the public schools, Ms. Bradford is an accomplished penny-pincher. Still, food often runs short, and the power company recently shut off the lights, leaving Ms. Bradford so upset that the boys could not focus in school.

“Sometimes the look in her eye, it’s like she’s sick — but she’s not sick, she’s just stressed,” Tony said. “It makes me feel the exact same way.”

Micah said his teacher scolded him for acting distracted, but “all I could think about is how is my Mama going to pay this bill?”

Cash That Makes a Difference, or Welfare?

Most needy families get other benefits, often at considerable taxpayer expense. Between food stamps, the earned-income tax credit and the child tax credit, Ms. Bradford receives about $10,000, plus Medicaid for herself and her sons. Mr. Spielberg gets Medicaid, subsidized housing and food stamps.

As recently as last week, Ivanka Trump, the president’s daughter, tweeted that the expanded credit shows that “we are fighting each and every day for hard-working American families.”

But the 2017 law mostly cut corporate taxes, and the Senate rejected an attempt by two Republicans, Marco Rubio of Florida and Mike Lee of Utah, to slightly reduce the corporate cuts to finance a larger credit for the poor. It would have given Ms. Bradford a gain of $450, rather than $75.

Of the $73 billion of increased spending on the credit, 39 percent went to families in the top quintile and 2 percent to those at the bottom, according to Elaine Maag of the bipartisan Tax Policy Center.

Robert Rector of the conservative Heritage Foundation warns that a universal child allowance would promote dependency and discourage work. “It’s classic, traditional welfare,” he said. “If there was anything we learned from the welfare debate in the 1990s, it was that having a single mom at home with a child and no job is not a good idea.”

But some on the right argue that an allowance promotes work and family. “The problem with the old welfare system wasn’t that it gave money to single mothers, but that it clawed it back, dollar for dollar, when they went to work,” said Samuel Hammond of the libertarian Niskanen Center. “There’s no reason to think that a flat allowance would have the same effect.”

From liberals like Speaker Nancy Pelosi of California to conservatives like Senator Joe Manchin III of West Virginia, a majority of Democrats in both houses favor a broad allowance, as do at least seven of the party’s presidential candidates, suggesting the push is likely to continue. Democrats have been pushing for an expansion of the credit as part of a year-end tax deal.

To understand how poverty limits children, consider Josh Spielberg, whose Asperger’s syndrome would present challenges even if his family had money. “Social interaction is a little different for me — like I don’t understand jokes,” he said, sitting through an interview while solving Rubik’s Cubes. After he made his first friend last year — a “very good kid, sweet kid” — the friend killed himself.

While affluent students who share his goal of attending a good college often spend junior year prepping for tests, Josh took an after-school job at $7.50 an hour and is accelerating classes to graduate early and work full time. The extra load has been “a bit of a struggle,” he said, and may hurt his grades, but “I was tired of seeing my family not being able to get the things they needed and deserved.”

Asked what money could buy, his father said he wished Josh had an ACT tutor — though even without studying he beat the statewide average. For Josh, who is 6-foot-3 with a teenager’s appetite, the appeal of his paycheck is more basic.

“To be honest, it’s eating,” he said. “I treat myself to more expensive food. Like at Taco Bell, I’ll upgrade to the chicken instead of the beef.”

Email ThisBlogThis!Share to TwitterShare to FacebookShare to Pinterest
Labels: Break, Children, Ex, for, Tax, the