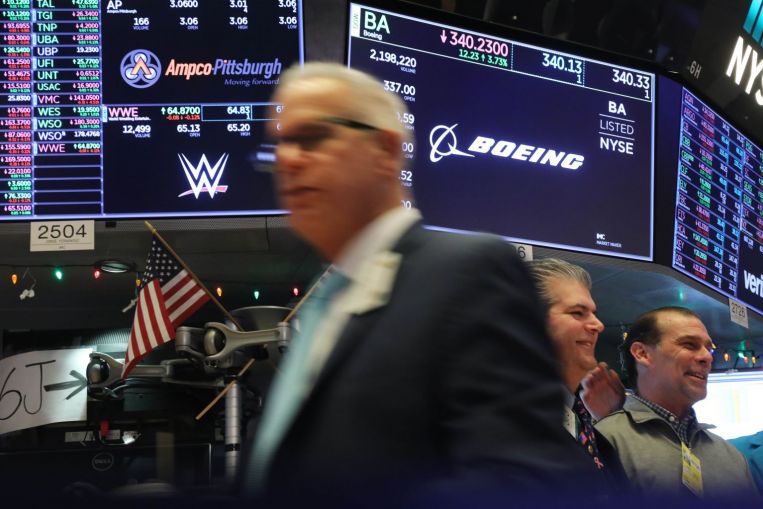 NEW YORK (AFP) – Wall Street stocks finished at records again on Monday (Dec 23), with an executive shakeup at Boeing lifting the Dow, as a holiday-shortened week opened with a flourish.

The Dow Jones Industrial Average climbed 0.3 per cent to finish the last full session before Christmas at 28,551.53.

The session marked the third straight record finishes for the Dow and S&P 500, and eighth straight high close for the Nasdaq.

The records have come amid positive developments in the grinding US-China trade war, with the US calling off new tariffs scheduled for this month following a tentative trade agreement.

On Monday, Beijing said it would lower import tariffs on more than 850 American products, though the move does not appear to be linked to the bruising trade war with Washington.

However, President Donald Trump retweeted two press reports on the tariff reduction Monday, without any additional comment, and the list includes many items that Chinese companies purchase from the US such as pork and tech goods.

Other factors in the surge include a series of accommodative monetary policy moves by the Federal Reserve and other central banks and mostly solid economic data.

Among individual companies, Boeing jumped 2.9 per cent after the embattled aerospace company ousted Dennis Muilenburg as chief executive and tapped board chairman David Calhoun for the job, saying the move was needed to restore confidence in the company as it works to repair relationships with regulators, customers, and all other stakeholders.

Email ThisBlogThis!Share to TwitterShare to FacebookShare to Pinterest
Labels: again, at, end, records, stocks, US