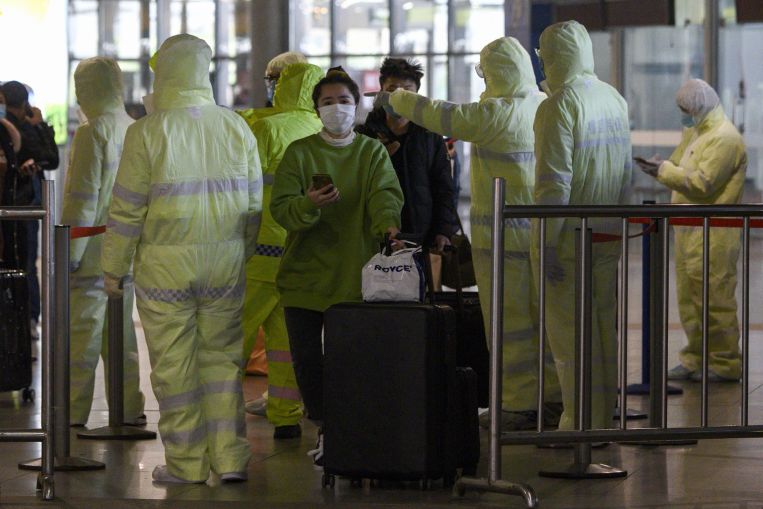 With the spread of the coronavirus showing little sign of abating, investor sentiment will continue to be dictated by developments on this front despite a slew of earnings releases from Singapore’s largest corporates.

Asian equities have been sold off since late last month on fears of contagion, though they staged a short-lived recovery in the middle of last week after the Chinese central bank provided a stimulus injection to calm fears of a sharp slowdown in its economy.

But by last Friday, anxiety had returned to the markets as Singapore’s Straits Times Index slid 50.07 points, or 1.6 per cent, to close the week at 3,181.48 on fears that the Government would raise its risk assessment of the virus situation.

After the markets closed, the Government raised the risk posture to orange, which means the outbreak is deemed to have moderate to high public health impact.

The Chinese city of Wuhan, the centre of the outbreak, has been in lockdown since Jan 23, and Beijing has curbed travel for individuals in over 10 other Chinese cities since.

The severity of the measures imposed by China to contain the virus has already dented growth prospects, noted Standard Chartered Bank economists.

As a result, the economists have downgraded the 2020 forecast for China’s growth from 6.1 per cent to 5.8 per cent.

With China playing a larger role in the global economy than during the severe acute respiratory syndrome, or Sars, epidemic in 2003, economists have cautioned that the spillover effects are likely to hit trade-reliant economies like Singapore the most.

United Overseas Bank (UOB) projects the Singapore economy to grow 1.5 per cent this year. But if the outbreak of the virus lasts six months, the negative effect on growth would be in the region of 0.5 to 1 percentage point.

UOB Group head of research Suan Teck Kin said: “However, if the outbreak stretches further than six months, the second-order effects from trade, production and supply chain disruptions would further weigh on the growth outlook of regional economies.”

With the Singapore Government announcing its Budget for 2020/21 on Feb 18, some relief measures for businesses and various sectors could be expected.

In the local market, the corporate earnings season for the October-December quarter continues to hot up.

If the outbreak stretches further than six months, the second-order effects from trade, production and supply chain disruptions would further weigh on the growth outlook of regional economies.

UOB GROUP HEAD OF RESEARCH SUAN TECK KIN, on the effects of the coronavirus outbreak on economies.

Among property trusts, Lendlease Reit, which has been listed since last October, will report its results for the first half of financial year 2020 today.

Fourth-quarter earnings for Prime US Reit and Far East Hospitality Trust are due on Wednesday and Friday, respectively.

Some of the city state’s big names will be reporting results towards the end of the week. These include Genting Singapore on Wednesday; DBS Group Holdings and Sats on Thursday; and ComfortDelGro and Singapore Airlines on Friday.

The local economic data docket is light, with just retail sales data for December due on Wednesday.

Email ThisBlogThis!Share to TwitterShare to FacebookShare to Pinterest
Labels: Coronavirus, limeligh, may, steal