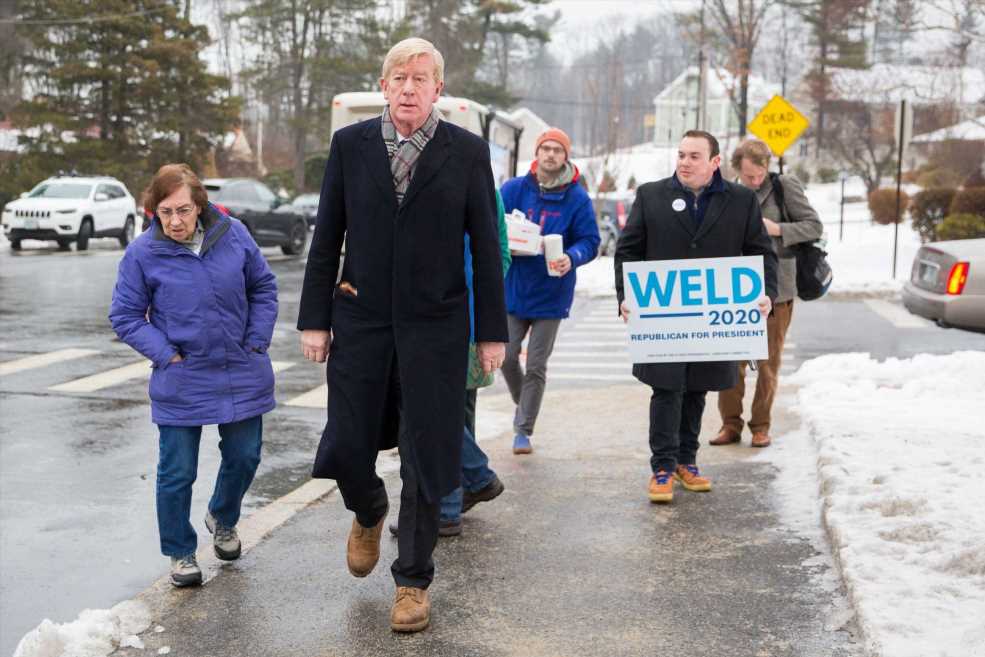 With 79% of the precincts tallied, Trump was leading former Massachusetts Gov. Bill Weld 86% to 9%.

Candidates in the GOP primary had to win 10% to get a proportional share of the 22 delegates at stake.

During a gathering of his supporters at a restaurant beside the Merrimack River, Weld and his top campaign staff remained defiant.

“We are here to reclaim the Republican Party,” said Betty Tamposi, who was a State Department official in the President George H.W. Bush administration. “Mr. Trump does not own this party.”

Weld told the several dozen staff, volunteers and supporters that former White House aide Steve Bannon — whom Weld called Trump’s “Svengali and Robespierre” — had recently pointed out that Trump could not be reelected if he lost more than 3% or 4% of Republicans.

“So looking at these numbers, he can’t be reelected,” Weld said. “On to Super Tuesday!”

For a short period last autumn, there were three Republicans hoping to take the party’s nomination away from Trump. But the Republican National Committee, as well as the state parties, worked hard to keep their members in line behind Trump’s reelection. A handful of states canceled primaries and caucuses outright, while some others rigged the rules to make it all but impossible for challengers to make the ballot.

Mark Sanford, a former South Carolina governor and congressman, dropped out in November after only two months in the race. And former Illinois congressman Joe Walsh ended his campaign last week, days after winning just 348 votes in the Iowa caucuses, despite having campaigned there nearly nonstop for weeks.

“Weld is a good man. But Trump can’t be beat in the Republican Party. Because the party is Trump’s Party. And it’s a cult,” Walsh said Tuesday, not long after television networks had called the Republican primary for Trump based on exit polls and the first returns. “Which is what I realized a while ago. Which is why I’m focused on stopping Trump in the general.”

Weld did only slightly better than Walsh in Iowa, winning 424 votes to Trump’s 31,422. But the second-place finish was enough to win a single delegate to this summer’s nominating convention in Charlotte, North Carolina.

Weld had hoped to pick up more in New Hampshire on Tuesday, but needed a minimum of 10% of the vote to qualify for any delegates. Because he did not, Trump wins all 22 delegates the state had in play.

Both Nevada and South Carolina canceled their contests this month, so the next opportunity for Weld to pick up delegates is on Super Tuesday on March 3. However, rather than awarding delegates proportionally to the share of the statewide vote, as in New Hampshire, most of the coming contests are either winner-take-all or winner-take-all by congressional district. Both methods make it difficult for Weld to earn more delegates.

“He may be done winning delegates,” said Joshua Putnam, a political scientist who closely follows the parties’ nomination schemes. “It gets much, much tougher after today.”

Winning a number of delegates could give Weld the ability to criticize Trump or ask for platform changes at the Republication nominating convention this summer. However, the party formally adopts the rules for the convention as one of its first tasks — meaning the GOP could quash any possible voice Weld might be hoping for.

Weld was a top Justice Department official under President Ronald Reagan before winning two terms as governor of Massachusetts. That background, however, holds little sway in a party now in the firm control of a man best known for hosting a reality game show prior to running for president, his first attempt at elected office.

“It’s been a hostile takeover,” said Fergus Cullen, a former state party chairman in New Hampshire and a vocal Trump critic. “I don’t think many thought Weld would get double digits. Especially with the Democratic race attracting the independents.”

Source: Read Full Article
Posted by BestNewsMedia at 1:50 AM